On May 1, 2021 Mārtiņš was buried in the Limbiķi Cemetery.

Nearby is the “Iļģi” social care centre, whose residents Mārtiņš had ministered to for many years. For his final resting place, Mārtiņš chose the farthest, abandoned section of the cemetery, where deceased “Iļģi” residents are buried.

The last project Mārtiņš charged us with is to erect a monument in this part of the cemetery dedicated to the people buried there. The monument will depict Jesus with open arms, and the inscription will read:

Since Mārtiņš passed away, many people near and far have already expressed a desire to help realise this project. To that end, we have set up donation accounts in Latvia and Germany.

Creation of the Statue of Jesus

A suitable fieldstone for the statue is found

Creation of a life-size model of the statue in clay

Making a plaster cast of the model

Chiseling the statue in stone 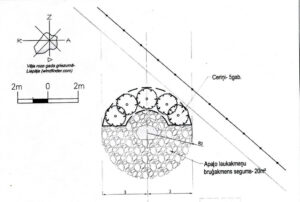 Transport and installation of the statue at the Limbiķi Cemetery

Inauguration of the Jesus statue at the Limbiķi Cemetery

Born 10 January 1947 in Riga. Ojārs Feldbergs’ father had recently returned from forced exile in Russia but was deported again in March 1949. Feldbergs lived in the Sarkandaugava district of Riga with his mother and younger brother and studied building construction at a technical school. In 1976, he graduated from the Sculpture Department of the Art Academy of Latvia.

After Latvia regained its independence in 1990, Feldbergs moved to his father’s native parish of Abava and in 1991 purchased the former manor house of Firkspedvāle Estate, next to which he established the Pedvāle Open-Air Art Museum. In 2018, it was renamed Pedvāle Art Park.

Feldbergs’ work can be found in the Latvian Artists’ Union Museum, the Latvian National Museum of Art, the Tretyakov Gallery in Moscow and other museums as well as private collections.

Detailed Description of the Project

A detailed description of the project is available in Latvian and German.