This text is an automatic translation from DeepL Translate.

The year is drawing to a close. In the Church of the Cross (Krusta draudze) and in the Liepāja Diaconal Centre, many things were finally able to take place again after the corona-related restrictions; the congregation, consisting of 95 parishioners, continues the work begun by Pastor Martin Urdze undeterred. One of his impulses is particularly effective: the assumption of joint responsibility for a successful parish life. The pastorate is still vacant. Karina Krievina, the director of the diaconal centre, and a small team with her organise the daily work in the congregation as well as church services, projects and other events.

The legal disputes with the Evangelical Lutheran Church of Latvia (LELB) continue. This year there was a success: the Latvian Supreme Court decided that the designation Church of the Cross is legal and will not be withdrawn, as demanded by LELB.

The next court date is 14.02.2023, when the premises of the church and the centre will be negotiated. These are claimed by LELB. Against the background of the uncertain outcome, urgently needed investments on the part of the congregation, such as the repair of the church roof or also the repair of the defective lift, are suspended for the time being. The content of the work is not affected by this. 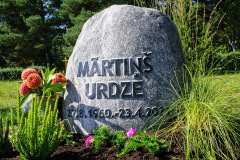 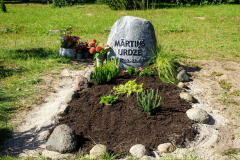 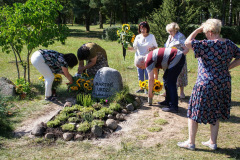 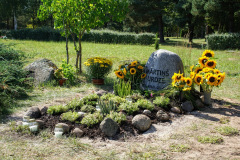 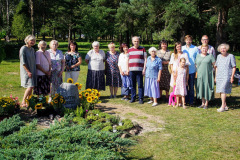 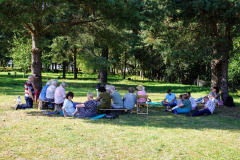 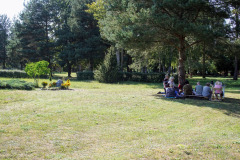 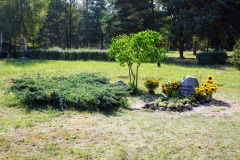 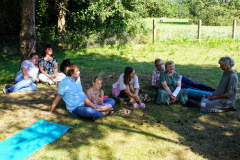 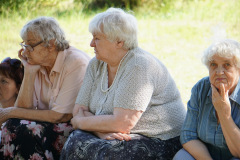 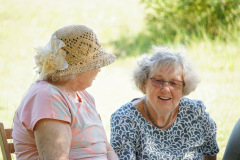 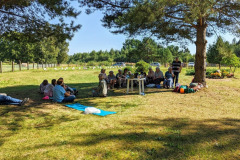 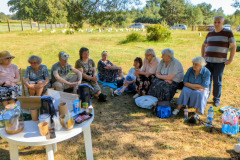 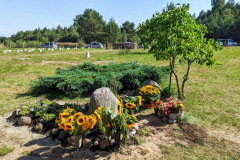 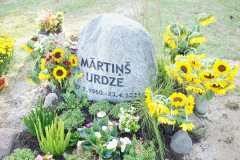 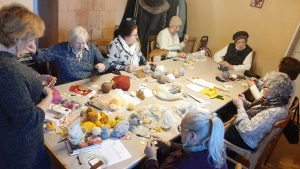 Mārtiņš and I are playing football in a long, dreary hospital corridor. He is quite light-hearted and in good spirits but has little strength. He passes the ball to me so that I can make a long pass…

Tabita’s dream on the night of the one-year anniversary of Martiņš’ death on 23 April. Mārtiņš probably would have liked it.

Mārtiņš is often with us these days. His last weeks were and are for us closely interwoven with the events of the Easter season – the powerlessness we felt in the face of his rapid illness, the difficulty of the Covid-19 pandemic, the great sadness we felt, the feeling of community we witnessed. But also the quiet certainty that we remain united in love.

Yesterday Toms and Amanda met Ivars and his family at Martin’s grave, where people from the Krusta congregation have planted colourful flowers. 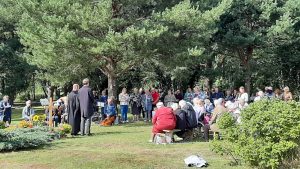 A good three weeks have passed since Mārtiņš’ birthday, but the warmth we have received, the closeness we have experienced in our grief and the awareness that he was and will remain a great gift for many of us fills us with deep gratitude.

Mārtiņš’ death on April 23 came unexpectedly quickly for us. We had hoped for a little more time together. Looking back, we understand that he had been preparing inwardly for his departure for some time. A week before his death, we (Mārtiņš, Tabita and Toms) visited the Limbiķi Cemetery, where a section is reserved for the deceased residents of the “Iļģi” social care centre and where Mārtiņš also wanted to be buried. Mārtiņš told us about his wish for a statue of Jesus to be erected here in this forlorn part of the cemetery, which would be dedicated to the people buried there. He did not go into detail and did not give any specific guidance. Instead, he left the realisation of his wish to us.

We want to give you an update on how our plans have progressed over the last month.

First of all, we want to express our gratitude for the donations received so far for the statue of Jesus in Limbiki cemetery! It is a good foundation for our aim.

A short time after Martinš’ funeral we met at the cemetery with representatives from the “Iļģi” social care centre and discussed the intention to erect a monument there. The head of the cemetery was initially very skeptical towards about the plan. However, already in the course of the conversation we felt that he started to embrace the idea.

We have prepared a pdf file with a summary of this project and additional background information – it is available in German and Latvian.

A heartfelt thank you to all who expressed your sympathy and sincerity as we said goodbye to Mārtiņš – sharing your thoughts, bringing flowers, praying, playing music and supporting us through your thoughts and actions.

We are moved and surprised by how deeply and broadly Mārtiņš touched people.

For his final resting place, Mārtiņš chose the “pauper section” of the Limbiķi Cemetery to be buried alongside the people whom he had served. On the day of his funeral, the sun was shining and the mourners brought a sense of unity and sanctuary to this place. But the very next day a cold wind was blowing and a frost had nipped the flowers we left on his grave; a harshness and bleakness had returned. We want to believe that our love and care are still with Mārtiņš, protecting him and providing him warmth. We want to believe that he is in God’s loving hands.

In all likelihood, Mārtiņš knew how difficult his passing would be for us. That is probably why he charged us with fulfilling his last wish – erecting a statue of Jesus with open arms in the Limbiķi Cemetery as a symbol of hope and compassion. We very much hope to realise this project by Mārtiņš’ birthday and that on August 27 we will be able to celebrate and commemorate him here with you.

We will continue to publish your memories and updates on the statue project on the martins.urdze.lv website.